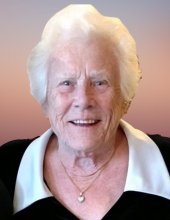 With a heavy heart, we share with you the passing of Mrs. Terry McGovern.
Mrs. McGovern has been part of the Bergen Catholic community for almost 50 years starting at BC in 1972.

Therese M. (Markey) McGovern, 90, of River Edge, formerly of Oradell, passed away peacefully with family at her side on Monday, April 12, 2021. She was born in West New York in 1930 to Edward and Leona (Ott) Markey.

For 56 years, she was the devoted wife of Howard F. McGovern, until he passed away in 2009. Their legacy continues with their children MaryBeth (Steve) Budra, Tom, (Paula Valenti), daughter-in-law Ann, Patti (Peter) Hill, Bill (Colleen), Jim (Lauren), Rob (Kelly), Mike (Kristy), Dave (Melanie) McGovern, and 29 grandchildren whom she adored and who adored her. She is also survived by her dear brothers Reverend Earle Markey, S.J., and Dave (Dorothy) Markey, and treasured sisters-in-law Mary Ann McGovern and Betty Black. She was predeceased by her parents, beloved son Jack, brother Ed (Carol) Markey, brothers-in-law George (Jean) and Charles McGovern, and sister-in-law May (George) Best. She is also survived by many loving nieces and nephews.

Terry graduated from St. Joseph High School in West New York and Ladycliff College in Highland Falls, New York. She was an elementary school teacher before they started their family, living in Northvale, then River Vale, and Oradell, where they lived for 31 years. Their children attended Assumption School in Emerson, Academy of the Holy Angels in Demarest, and Bergen Catholic in Oradell. Terry volunteered at church and school for many years and began work as the Business Manager at Bergen Catholic in the early 1980s. She continued to work and volunteer at Bergen up until a year before her death and was a fixture at the gate selling tickets for BC sporting events for decades. She was inducted into the Bergen Catholic Hall of Fame and she and Howard were the honorees of the McGovern Award, given annually to a deserving recipient. Terry also worked at White Beeches Country Club pro shop, merchandising and selling golf apparel and equipment for the last 10 years.

While she loved to keep busy with work, and playing golf and paddle tennis at Hackensack Golf Club, her favorite thing was watching her children and then her grandchildren compete at their sporting events, from youth up to the professional level. She was their biggest cheerleader and never hesitated to let a referee know she disagreed with a call. She always reveled in the academic and professional successes of her children and grandchildren, as well as their athletic accomplishments. Terry loved to be surrounded by her family who treasured her indomitable spirit and love of life. She always had a smile and taught us to face life’s challenges with strength, courage, and resiliency. Her faith was an integral part of her life as she had unwavering trust in God’s plan for her and her family.

Family will receive relatives and friends on Wednesday, April 14, 2021, from 4-8 pm at Basralian Funeral Home, 559 Kinderkamack Road, Oradell, NJ. In light of COVID restrictions, the family asks that all in attendance limit your stay to only a few minutes to allow everyone to pay their respects as there is a mandated limit to the amount of people allowed in the building at once. Mass of Christian Burial is planned for Thursday, April 15 at 11:15 am at Church of the Presentation, 271 West Saddle River Road, Upper Saddle River, NJ; due to COVID there will be a limit to the number of people allowed at the church, a livestream will be offered for those who wish to attend virtually, www.churchofpresentation.org/funeral-ministry. Interment will follow at Maryrest Cemetery in Mahwah, NJ.